So I didn't actually eat anything that unusual in Hong Kong. So, this may be less exciting than you were hoping for. There will be pictures of open air butchering and lots of unidentified street meat, however. Actually, lets get the open air butcher and fish monger out of the way. 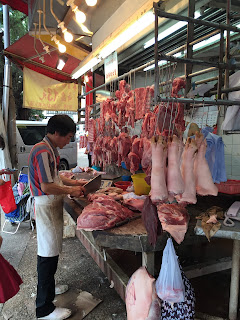 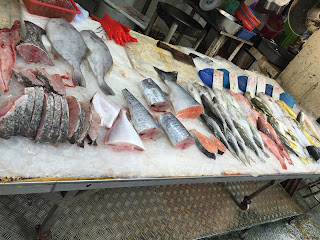 I just had Mr Chens for lunch, so I am in the mood to write about Chinese food. In a lot of ways, the food I ate in Hong Kong was basically the same as I might find here. Purely by pointing at a menu and pictures on the wall, I managed to order this delightful noodle dish one morning. It is basically just noodles with some pork and bok choy - nothing you can't get here. It was, however, dirt cheap, and very tasty.


The slightly more adventurous eating just meant pointing at whatever smelled the best as I walked down the street or through 'cooked food markets'. The smells were amazing, and I kept wishing I could bottle them up to bring home. One night, I strolled around spending a dollar here and there for a variety of wonderful treats that made my dinner.


It was not all random street foods. I also ate at Michelin starred restaurants! Tim Ho Wan was recommended by a friend who noted that it was "probably the cheapest Michelin starred establishment in the world." She recommended that I get the pork buns, among other things, and they did not disappoint. My entire bill there, which I split into two full meals, came to about $11 USD. After I got a suit made, I donned it to go to Din Tai Fung, another reasonably priced establishment with a Michelin star. A very full dinner there set me back about $20.

Because everyone wants to know something weird, I'll leave you on this tasty tidbit. My hostel in causeway bay was nestled amongst a bunch of decaying concrete buildings. In an alley behind it, there were a bunch of hole in the wall restaurants. Under a small time crunch, me and a girl from the hostel decided to grab something from one. We walked in the one that smelled the best, but had no english anywhere. The entrance was next to the kitchen, fairly open the the restaurant and the outside. We leaned in and gawked at the bubbling pots and poles of food, figuring we would just point and choose. An older lady started shouting at us and digging deep in a drawer for something. She pulled out an ingredient list which provided the english translation to the menu. This was clearly something that they did not often use. I picked two ingredients and a noodle type: Octopus, Pig Intestine and Thick Noodles. I was not disappointed: 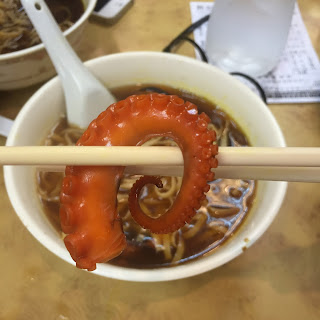