You Can’t Always Get What You Want

So, the highly anticipated announcement surrounding interest rate cuts was finally delivered yesterday. Chairman of the Federal Reserve, Jerome Powell, graced us all with a .25% (25 basis points) interest rate cut. This announcement effectively cut overnight lending rates to the range of 2% to 2.25% and was the first rate cut in a decade. Lower rates equal easier access to money through lower lending rates. Typically, the market tends to rally following a rate cut.  Cheaper money means more business investment, easier spending, and more money flowing through the economy. Good for investors, right? Yes, logically one would think this would be the case, but no, no, no, investors wanted more.

Prior to the announcement, investors had expected more rate cuts this year, and their valuations represented these further rate cuts. However, Powell made it clear this was a mere “mid-cycle” adjustment, and further rate cuts this year were unlikely. Investors wanted more, but Powell felt this was all they needed.  As a result, the market’s initial response was rather negative. The market, in essence, threw a temper tantrum, because they wanted either a higher cut, or more than one cut this year. Investor valuations were thrown for a loop, and with the likelihood of further rate cuts reduced, reported earnings were overstated. So, the market reacted strongly to the disappointing news and was forced to correct itself. 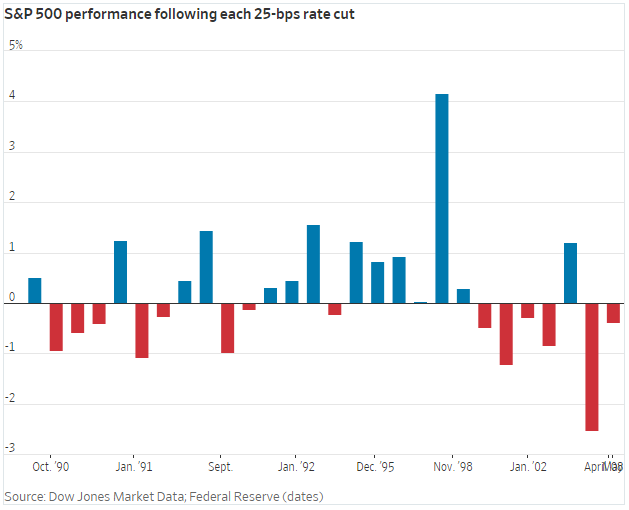 While the stock market reacted negatively to Wednesday’s rate cut, historically, the long term effects of interest rate cuts have been positive for the market. Since the early 90’s, for instance, the S&P 500 has responded with an average increase of 0.16% on the day of a 25 basis point slashing. Furthermore, a month later, broad stock market benchmarks have produced an average increase of 0.57%.

So, although rates were lowered, and investors now have lesser borrowing costs, they were not fully content with the Federal Reserve’s decision. They wanted 3 scoops of ice cream but only got 1. Yes, they still got their ice cream, but isn’t 3 scoops better than 1? Some might argue yes, most certainly. However, you can’t just eat as much ice cream as you want all the time. In this case, Powell limited rate cuts and gave them what he felt they needed. As with ice cream, you have to limit yourself, and in the wise words of legend Mick Jagger, “you can’t always get what you want.” Powell on the other hand may think this is “just what you need.”

Posted by Joseph B. Martin, MBA