When I drive by a gas station with low prices, I remark "they're going to be giving it away soon." It's my inside joke that gets a guaranteed eye roll from whoever else is in the car. Sometimes that is just me. Recently, some gas stations have come close to giving gas away, one near my house sold gas for $1 and gave free sandwiches and water away with a fill up recently. Costco was selling gas $1.17/gallon.

But yesterday - they really were giving it away for free.

To be precise, the price of oil went below $0. People were PAYING to get rid of oil. What's up with that? 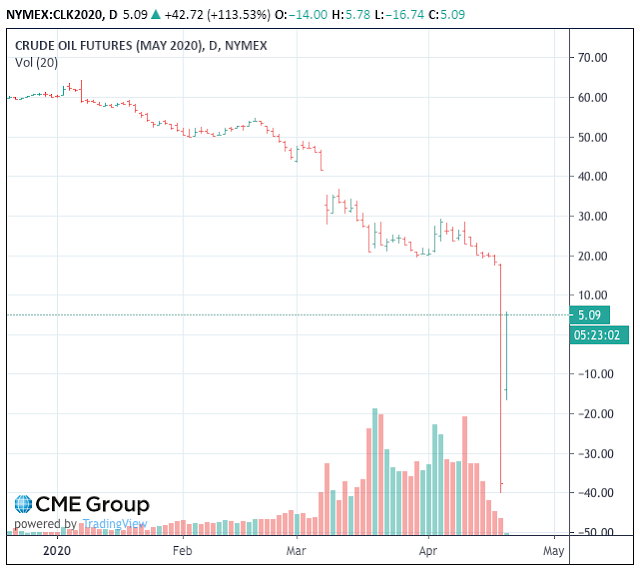 First, a primer. If you're trading oil for financial purposes (speculation, hedging, fun or profit, etc) you don't go out and secure a few barrels of the stuff, you trade contracts on a bunch of it. These standardized futures contracts state what type of oil, how much ($10,000 barrels, generally), what type (West Texas Intermediate, in this case) and when it will be delivered (there is a monthly schedule). If you hold the contract when it expires, congratulations, you own the oil! You just need to go to Cushing, OK to pick it up. This is all very standard stuff, and it's right there in the contract:

If you don't want to own the oil, easy, just sell the contract and pick up the next month. Generally, this works pretty smoothly. Again, oil is a widely used commodity and if you don't want it, someone else probably does.

But lately, oil prices haven't been working the same way they generally do. With heavy travel restrictions and everyone working from home, demand for oil in the form of gasoline and jet fuel has declined precipitously. On top of that Saudi Arabia and Russia decided start a price war, pumping as fast as they could and pushing the price down even further. American producers, indebted since the last oil price shock in 2016, kept their rigs pumping even though they starting losing money on every barrel. Having a little money and a lot of bills is better than having no money, and still a lot of bills, they figured.

So oil prices kept dropping, but how did they get negative?

If you're pumping oil, but nobody wants it, you've got to store it. People with storage space, in huge above ground tanks, massive ships or a salt dome in their back yard, charge for storage. That storage was filling up fast. When storage is full, and nobody will buy from you, the price will plummet more. Eventually, you've got to pay someone to take it from you.

A particular problem emerges when people holding contracts for oil realize that they can't store the oil either. If you're just holding the contracts in your brokerage account, or a fund like USO you can't take physical delivery of oil. You have to get rid of those contracts at any price - even if it means paying someone to take them.

That is what happened Monday. Nobody had storage space for oil and nobody wanted to hold their contract as it expired. Brokerages dumped the shares as fast as they could, which meant in some cases they were paying to get rid of them. The price of oil to be delivered in May dropped as low as -$40 at one point!

Could this happen again?

It is not impossible for oil prices to go below zero, but this has been a lesson learned for a lot of market participants. Brokers don't want to be on the hook for closing out customers positions at such a large loss (these are traded using money borrowed from the brokerage, if the value goes negative again, and you can't pay the broker back, that is the broker's problem!). Many will likely update their policies and procedures to keep that from happening again. Plenty of investors will continue to buy oil futures or funds though and storage will continue to fill up. The price action may not be as dramatic next time, but there certainly can be a next time.