Reading Along With Ryder Part 5: What Were We Thinking?!

Cleaning all of these magazines off of my desk is hard for me, because I don't want to miss out on the knowledge they contain. To alleviate this, I will summarize one article from each magazine as I clear it away. Click here for the last article I read.

Sorting through old magazines today a few bold headlines from Januarycaught my eye:

DON'T COUNT ON A RECESSION THIS YEAR

How did those turn out?

The first article (please note they have since changed the headline!), from the January 6th issue of Investment News, was an interview with Mohamed El-Erian, Chief Economic Adviser at Allianz and perhaps better known from his time at PIMCO with the legendary Bill Gross. El-Erian pointed to strong households supporting the economy and central bank provided liquidity driving further increases in the market.

While the headline prediction of no recession did not bear out, he was still largely correct in his thinking. Strong households did support the economy, when people were laid off, enhanced unemployment benefits made sure that people kept spending and the pain of recession was ameliorated. Liquidity did drive gains in the stock market. Support from the federal reserve bolstered faith in the markets and kept them well functioning after a sharp selloff in February and March.

Speaking of predictions, El-Erian also predicted that the Patriots would win the Super Bowl. He didn't get this quite right either, in Super Bowl LIV, the Kansas City Chiefs beat the San Francisco 49ers 31 - 20.

Looking back, the headline prediction was dead wrong, but the insight he gave in the interview was sound! 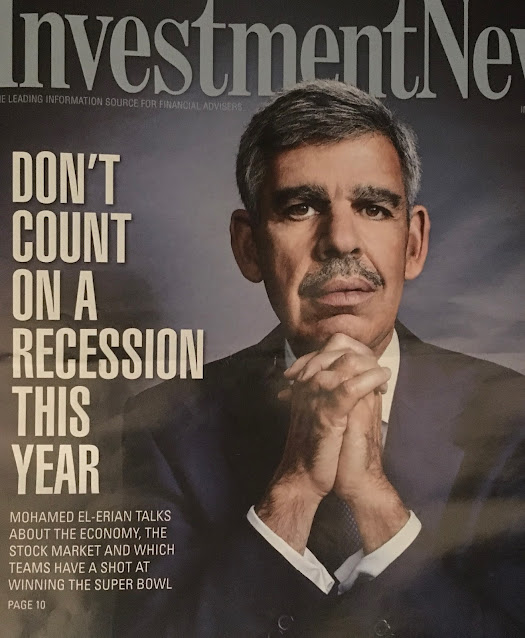 The second article, from the January 13th issue of Pensions and Investments, actually starts hedging their bets in the sub-title saying "big stock returns are unlikely." It cited some dark clouds lifting: a US China trade deal shaping up and clarity emerging on Brexit and Middle East tensions subsiding. Overall, improved trade dominated the economic outlook from Schroders, PLC - a British asset manager.

Unfortunately for these predictions, the impact of COVID-19 restrictions was to bring global trade to a grinding halt. Stories after March focused more on good sitting in docks, waiting approval to come in or a buyer to take them out.

The article did hedge, noting that equity markets had performed very well in 2019, and were unlikely to repeat the feat in 2020. Markets have been a mixed bag this year, giving us a 10% rise followed by a 30% fall, only to bounce back completely by August. The article noted key risks to the economy were still political: trade deals negotiations, inequality and the looming US presidential election.

I've included the industry forecasts for your entertainment below.

As a bonus, The Economist had a whole list of predictions for the coming year. They were looking forward to the Tokyo Olympics and the Dubai World Expo (both since postponed to 2021) and thought that we would all be talking about big anniversaries: Beetoven's 250th birthday, the 100th Anniversary of Prohibition (celebrated at the Mississippi History Museum!) and 50 years since the Beatles broke up. Aptly, they did predict that more quality entertainbent would be available to stream online, but insisted that people would watch the new James Bond in theaters, or travel to Cairo to visit the Grand Egyptian Museum. 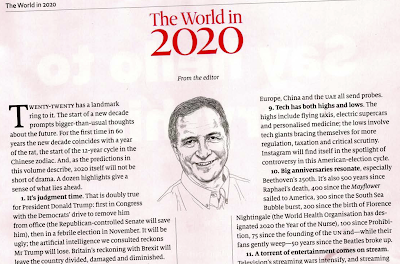 COVID-19 took us all by surprise. Even the most pessimistic predictions I remember did not include the death toll or economic interruption that we have had. While I will readily admit I was too optimistic when the news first broke, I am still not so pessimistic to think that it will hamper us for years to come. I don't know how the disease will end, but I know it will not end human innovation and desire to connect.